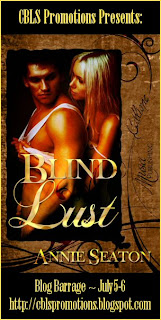 Fans of Annie Seaton, rejoice!  She's got a super steamy new book out that puts the heat in the heat wave we have going on right now.  For those unfamiliar of her works, what are you waiting for?  Now's the time with her scorching new release, Blind Lust, which I'm bringing you a glimpse of today as well as the chance to win.  So keep on reading to find out all the juicy tidbits about Annie's new book... 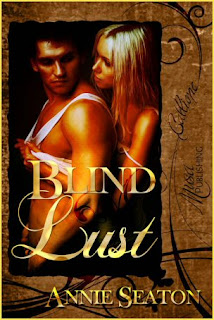 A wager between the gods can change your life. Even if you are a witch…

When Venus has a wager with Cupid, that prudish librarian, Lizzy Sweet cannot be enticed to love, she neglects to tell her son that Lizzy is a three hundred year old witch. The first man Lizzy sees after Cupid shoots his arrow is Josh Deegan, a famous country and western singer who has come to town to rediscover his muse, in an old farmhouse haunted by a culinary ghost. Local warlock, Wesley Gordon, who has been hitting on Lizzy to no avail for over one hundred years, is not impressed. The quirky old folk of Silver Valley watch fondly as the battle between love and lust plays out. Leaden and golden arrows zing around, spells are magicked, potions stirred, and ghosts hunted. Who will fall in love and who will let the other go forever?

Slowly, silently the full moon walked the night sky as Lizzy sat cross-legged in a circle of red candles on the damp grass in her back garden. Tall trumpet lilies bowed their heads elegantly to the moonlight, silver licorice plants formed long draping sweeps illuminated by the soft light.  The vanilla scent of white heliotrope mingled with the sweet smoke drifting across her hands, as they rested lightly in her lap.  Voices whispered in the silver birch trees and she chanted softly under her breath, repeating the incantation twenty one times.

“Unwanted love leave me be, cease your ardor, my warm regards have no path.”

At the end of each seventh incantation, Lizzy lit another candle and closed her eyes to begin the next round. When she finished and the candles died, she stood, stretching, her body and soul renewed, clear of any carnal desires. She frowned. It had been a most peculiar day. Her body yearned for Josh, and now for the first time in thirty years, Wesley’s naked chest stayed in her mind.

“Do you believe in ghosts, Josh?” she asked quietly.

He laughed uneasily, shaking his head. “If you had asked me that a couple of days ago I would have said you were crazy, but honestly now I don’t know.”

“What about witches?” She paused. “Magic spells and potions?”

“Give me a break,” he said, running his fingers through his shaggy hair. She was silent as she gathered her thoughts.

“You’ve been here for a week, haven’t you Josh?” she asked softly.

“Have you felt your Aunt Helen’s presence?”

He looked at her without answering and a strong gust of wind rattled the kitchen windows. The storm clouds scurried across the moon, the sky cleared and a shaft of moonlight shone through the kitchen window. Lizzy stood bathed in moonlight, the lace of the curtains fracturing the beam, and the power of the moon goddess entered her strengthening her will.

“Thank you, mother,” she breathed, her eyes closing as she let the power do its work. She stood motionless for a full minute.

“Lizzy, are you all right?” Josh sounded wary.

She stood tall and straight, holding her hand out to him. “It’s all right Josh, I’m sorry I upset you.”

He hesitated before crossing the kitchen and taking her hand. The look of adoration in his eyes sent sparks running along her nerve endings, all she needed was his touch. Closing her eyes, Lizzy focused on the power of the mother within, to resist succumbing to temptation once again. 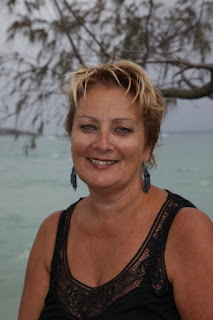 Annie Seaton lives on the beautiful east coast of Australia, where she loves sitting in her writing chair, gazing at the ocean and writing stories. She has always been fascinated by all things historical and has found her niche writing contemporary romance and steampunk, where strong heroines and brooding heroes fight together to make their alternative world a better place.

Her debut novel, Holiday Affair, a contemporary romance set in the South Pacific was released as part of Entangled Publishing’s Indulgence line in March. The sequel Italian Affair is currently underway Watch out for the story of Tom and Brianna the sex therapist who spices up his life!

Winter of the Passion Flower was released through Lyrical Press at the same time. Currently immersed in the creation of Book Two, a full length novel, the adventures of Sofia and her Scottish laird, Annie is already looking forward to the rest of the series, particularly the adventures of Indigo’s four boys: Jago and Jory, Ruan and Kit. Strong sassy heroines and rebellious heroes have a rollicking good time as they work to make the world a better place--albeit their own steampunk world.

Blind Lust, a paranormal novella will be released by Musa Publishing on 15th June.

Annie lives with her husband, and ‘Bob’ the dog and two white cats, in a house next to the beach in a small coastal town of New South Wales. Their two children are grown and married and she loves spending time gardening, walking on the beach and spoiling her two grandchildren.