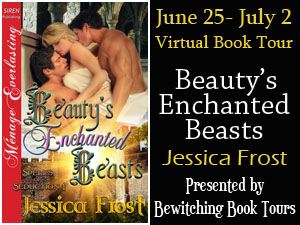 Those wanting to make this sweltering summer even hotter need look no further than Beauty's Enchanted Beasts by Jessica Frost that takes some tried and true historical themes and lights them on fire.  Through this sexy menage involving a frightened heroine and the evil sorcerer bent on keeping true love at bay, the reader ends up on a roller coaster ride full of sexy action in and out of the bedroom.  This is exactly my kind of story and I think it will be yours too.  So keep reading to learn more about this sexy starter to what promises to be an entertaining and steamy historical series. 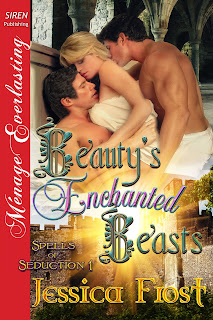 Elizabeth Stuart thought she couldn’t hate the Duke of Norfolk any more than she did. After he wins her in a bet and she’s forced to live in his castle, she learns she was wrong. Penniless and distraught, she moves in, vowing to make him pay.

Richard Albert has loved Elizabeth for so long. When her father asks his help in protecting Elizabeth from the evil sorceress Pondora, he agrees wholeheartedly, not knowing Elizabeth’s father lied about why she’ll be staying with him. Now she thinks he’s evil incarnate.

Soon these three get caught in a web of deceit, sex, and love. Little do they know Pondora has figured a way past the castle’s enchantment and intends on executing her deadly curse.

Elizabeth continued to search, opening doors to empty rooms or storage areas, until she came to a door and, upon opening it, was surprised to see a man sat on a chaise longue reading a book.

“I’m terribly sorry. I thought this was the door leading outside,” she said blushing, trying to close the door behind her.

He instantly stood up, a look of shock plastered on his face. His wide eyes just stared at her while he remained silent. Then he broke eye contact and cleared his throat.

“It’s quite all right.” He approached her with a bright smile. The sparkle in his sharp eyes looked familiar and she lost her breath for a moment. “You must either be Lady Elizabeth or her sister, Ann.”

He took her hand and bowed, bringing her hand to his warm lips. Never breaking his fixed gaze on her, he continued, “But from my brother’s description, you must be the beautiful Lady Elizabeth, no doubt.”

Her cheeks warmed at his compliment and she couldn’t help but stare back at him in a trance. His beautiful azure eyes bewitched her, as did his full lips and strong chin. When she finally acknowledged in her mind she had been gawking, she immediately lowered her gaze to the floor in embarrassment. Words to reply came languidly as time seemed to stop. After taking a shallow breath, she said, “I didn’t realize the Duke of Norfolk had a brother.”

He chuckled. “Younger brother who gives him more headaches than he’d care to have, I’m afraid. Perhaps that is the reason he never mentioned me. My name is George.”

“Oh, well, your brother and I haven’t really spoken often, or for long. We’ve barely conversed.”

His brow lifted in apparent surprise. “Really? And yet here you are, Norfolk Castle your new permanent residence.”

“That, my lord, is your brother’s doing, not mine. I had no say in this arrangement he and my father made.” Her anger rose.

“Ah, yes, the supposed bet. Yes, yes, I had forgotten about that.” He walked around her tapping his index finger on his pursed lips while he looked her over like a prize.

It was obvious the Duke’s brother had his same rude manners and disrespect for women. Yet surprisingly a part of her found George’s admiring attention flattering. Before she could open her mouth to put him in his place, he remarked, “What if there were no bet, my lady?”

“Pardon me?” She frowned, not understanding his question completely.

“What if there really were no bet? Would you have come to live here just the same?” he asked as he came to stand before her a mere few inches away. She could swear she heard his heart beating for how close he stood. His virility seemed to intoxicate her that instant.

“If there were no bet? Well, of course I wouldn’t.”

“Ever!” she reiterated with a firm tone.

“Even if your life were in danger?” George said, inching his face closer to hers while his gorgeous eyes fixed on her lips.

Her lips throbbed under his hungry stare and her voice cracked. “No, not even then.”

He broke his gaze then and frowned. “I see.” He turned and walked to the window, staring outside with a blank, far-off expression for a moment.

Feeling awkward, and disappointed he had diverted his attention elsewhere, she made her way to the door. “I’m sorry for interrupting you. I’ll be on my way now.”

He turned to look at her. “Where was it you were headed, my lady?”

“I was trying to find the door that led to the garden outside. I saw it from my bedroom upstairs and wanted to take a leisurely walk in it.”

“It’s a beautiful day outside and the perfect time for a walk in the gardens.” He walked up to her and extended his arm for her to take. His brow lifted and a smile spread over his lips. “If my lady would allow me the honor of showing her our prized gardens, I’d love to show them to you.”

Blushing once more, she replied, “I don’t want to be a bother, my lord. You were reading when I interrupted you.”

“Yes, and the book was dreadfully boring. I’d much prefer the company of a beautiful lady.”

Her brow lifted in warning at his wording and he laughed at his gaffe. “I mean I’d much rather accompany a beautiful lady to see our gardens than read a boring book.”

She looped her arm through his. A tiny shock, when her hand made contact with his, traveled through her arm and targeted her chest. Her breath caught in her throat and her legs became weak for a second.

He pulled her in closer, wrapping his arm around her waist, and began to guide her through the door into the corridor.

Being so close to him as they walked made her palms sweaty and her mouth dry. She wished the lump in her throat would dislodge so she could begin to breathe again. Her bodice tightened on her breasts as she tried to expand her chest to take in air. Then an uncontrollable, arousing urge she had never before experienced overcame her.

In fear of the unbounded excitement surging in her body, she desperately wanted to break free from him and run in urgency.

Jessica Frost has always had a passion for fiction and the written word. Add to that her wild, vivid imagination and her pure romantic tendencies and she soon realized she had the traits needed to become a romance author. She decided to take the very big first step not that long ago and wrote her first erotic romance story. And she has not looked back since. Being a romance writer is a dream come true for her. Having the opportunity to create fantasy worlds where anything and everything can happen is an amazing feeling. She hopes these worlds and the delightful characters she creates will bring hours of enjoyment to her readers as they have done for her.