I love when a book comes along and draws you in with its theatrical feel.  Prime Time by Jane Wenham-Jones is just such a book that made me feel like I was watching an episode of dramatic television.  Jane is here today talking about writing, her book-worthy life, and her new book, as well as giving you a glimpse of it.  So sit back and get to know Prime Time.


My philosophy as a writer is that nothing is ever wasted. I use this to comfort myself when things have gone spectacularly wrong, I am cringing with shame at four a.m as I re-live another ill-advised evening of too much wine and not enough keeping one’s mouth shut, or I just have let myself in for something from which any sensible person would run a mile.

Some of my forays into the world of day-time TV have come into all three categories! Although my very first appearance on screen remains one of the best things I have ever done.

It was on Ready, Steady, Cook and I still have my pinny.

I went on with my lovely friend, the novelist Lynne Barrett-Lee, whose idea it was that we should offer ourselves as a brace of novelists and apply for an audition.

This took place in a classroom in a university building somewhere behind the British Museum and involved us acting out the presentation of our ingredients using rolls of sellotape, with a roomful of other hopefuls.

I think there is an argument for not trying too hard in these situations. We both giggled and dropped things and generally wittered on aimlessly, but Lynne was supremely confident we’d be chosen and we were – to the evident fury of the couple before us who, in a well-rehearsed and orchestrated double act were poised to launch into the full Hamlet to Ophelia Get-thee-to-a-nunnery scene when they were thanked and sent off.

When the actual filming came – in a studio in Wandsworth, we were there pretty much all day, having our hair and  make-up done, watching the earlier recordings, eating  a lovely lunch etc.

The actual recording went really fast and since the question everyone always asks me is: do they really cook it all in that short space of time, I can tell you, yes they do. My only contribution was to chop a few broccoli stalks, grate some cheese and stare lovingly at Ainsley Harriott who is very gorgeous and as nice off camera as he appears on it.

My chef, Tony Tobin, did everything else and we won against Lynne and Phil Vickery, although I can’t claim any credit – see above. I had simply followed instructions to the letter: Don’t stand there doing nothing – wine or wipe. In other words, when in doubt, mop at the surfaces or pour a drink. No contest. We were given more wine afterwards and allowed to eat the wonderful food. By the time the car took me to back to the station, I could barely stand. 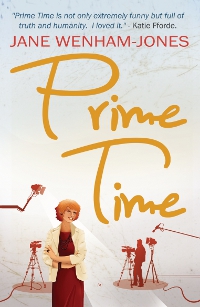 Laura Meredith never imagined herself appearing on TV, she's too old, too flabby, too downright hormonal, and much too busy holding things together for her son, Stanley, after her husband left her for a younger, thinner replacement. But best friend Charlotte is a determined woman and when Laura is persuaded on to a daytime show to talk about her PMT, everything changes. Suddenly there's a camera crew tracking her every move and Laura finds herself an unlikely star. But as things hot up between her and gorgeous TV director, Cal, they're going downhill elsewhere. While Laura's caught up in a heady whirlwind of beauty treatments, makeovers and glamorous film locations, Charlotte's husband, Roger, is concealing a guilty secret, Stanley's got problems at school, work's piling up, and when Laura turns detective to protect Charlotte's marriage, things go horribly wrong. The champagne's flowing as Laura's prime time TV debut looks set to be a hit. But in every month, there's a "Day Ten" ...

Prime Time is published by Accent Press, and is available from Amazon UK, Amazon US, Waterstones and all other good book retailers.

Jane is the author of four novels and two non-fiction books – Wannabe a Writer? - a humorous look at becoming a scribe  - and Wannabe a Writer We’ve Heard Of?  a guide to the art of book and self promotion.  As a freelance journalist she has appeared in a wide range of women's magazines and national newspapers and writes regular columns for Woman's Weekly and Writing Magazine, where she is the agony aunt. Jane is an experienced tutor who is regularly booked by writing conferences and literary festivals to run workshops and give talks on all aspects of the writing process. She is also a member of Equity, has presented for the BBC on both TV and radio and has done her fair share of daytime TV, particularly when promoting her controversial second novel Perfect Alibis (subtitled How to have an affair and get away with it...) It was those – sometimes hair-raising – TV experiences that inspired Prime Time, her new novel. For more information see http://www.janewenham-jones.com and http://janewenhamjones.wordpress.com/.
at July 09, 2012