Review for Melt Into You by Roni Loren 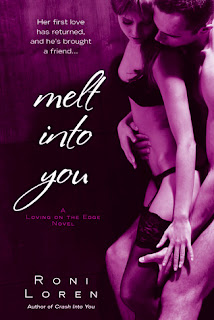 Her first love has returned, and he's brought a friend...

After running away from home and the boy who broke her heart, Evan Kennedy has kick-started the perfect new life with her celebrity fiancé. So what if said fiancé prefers guys? She knew the deal when they got engaged. And with her ticket to The Ranch, an exclusive resort where any fantasy can be satisfied, she can find someone to fulfill her less-than-traditional desires on the side.

She just never expected that man to be Jace Austin, her old heart-breaker—all grown up, hard-bodied, and holding out a collar. She knows it’s a world-class bad idea—especially since Jace has brought along his buddy Andre, who’s every bit as irresistible. But if they can stick to the no-strings rules, so can she.

Too bad Jace has never been so good with rules. Evan is convinced “forever” is a word used only in greeting cards, but Jace and Andre have one last fantasy of hers left to fulfill. It’s time to go big or go home. And neither man has ever been a fan of going home.

Roni Loren's Loving on the Edge series continues its wonderfully entertaining momentum as teenage crushes/foster siblings are reunited as adults after a night of love led to years of guilt and heartache.  As a teen Evan felt unloved and unimportant stuck in a pit of depression from which she could only express herself through cutting.  Foster brother Jace always had a way with people and Evan formed a strong bond with him that ended badly and led her to almost committing suicide while living on the streets.  For years guilt ate away at Jace when one night they're unexpectedly reunited and they get set on a path that puts them through the emotional wringer once again.

Jace's life has been emotionally difficult as well.  His father feels as if he's a failure since he wants to go his own way in life and not rely on the family business and money.  He constantly belittles him which has given Jace self-esteem issues.  He also has an ex-wife who wanted him only for money and cheated on him constantly.  Jace now has a hardened heart and only wants relationships that are superficial.  His friend Andre understands Jace's pain and is one of the only people he can count on.  They've always shared their women but as the story progresses their relationship evolves into something stronger and more fulfilling.  Not to mention steamy!

Evan's return to Jace's life is full of secrets and obligations and I ached for everything she'd been through and continues to go through out of loyalty.  She's willing to sacrifice her happiness because of a perceived obligation and this part of the story was extremely annoying and made me very resentful towards Evan's fiancee Dan and his emotional manipulations.  The only people she can really count on are Jace and Andre and their extremely sexy menage which is first and foremost based on truth which none of them have had enough of in life.

This was a thoroughly satisfying story with two sexy heroes with dramatically different qualities who together make the perfect man.  The sexual encounters are frequent and seamlessly interwoven throughout the story with some scenes of lite-BDSM play and some m/m action as well as a menage.  There's glimpses of characters from previous books which add a family feel to the story but doesn't mean you have to have read the previous book to fully embrace this one.  The glimpses of Ranch owner Grant and Ranch member Colby were very enticing and have me excited for the future of this series.  Have a tissue nearby though as Evan's past is highly emotional and her surviving it makes her even more likable and someone to admire.

*I received this book from the author in exchange for my honest opinion.
at July 18, 2012