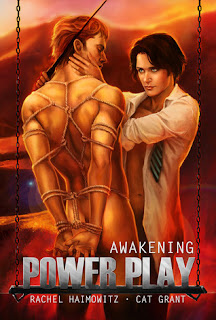 Brandon McKinney is a man reborn. Newly awakened to the notion of consensual power exchange and the submissive urges inside him, he begs for a second chance from the man who opened his eyes to this world: Silicon Valley superstar Jonathan Watkins. But no birth is absent pain, and Brandon’s is no exception. He fears he’s not strong enough to see it through.

Jonathan knows better. He’s seen the iron core inside his new submissive, and the wounded heart inside him too. He means to teach Brandon to heal the one with the other. They have five months left on their contract, after all, and Jonathan has done more with less before.

It’s tough to stay objective, though, when you’re falling in love. Shame Brandon doesn’t feel the same. He’s only there for the three-million-dollar payout at contract’s end—a fact that Jonathan, nursing his own wounded heart, reminds himself of each day. For even as Brandon’s barriers break and his mind expands, even as he grows to love his place at Jonathan’s feet, he’ll never love life with a sadist—especially one who cannot escape the public eye.

*I received this book from the authors in exchange for my honest opinion.
at July 14, 2012