I'm a big fan of books featuring rock stars and men with sexy accents and recently came across just such a book by JoAnne Kenrick.  Shamrocked is the second book in the Irish Kisses series and part of Decadent Publishing's 1Night Stand series and promises lots of steaminess amidst mistaken identities.  I'm bringing you a glimpse of this book today as well as letting you know how you can win a Kindle Fire or a Nook Tablet.  So here's a taste of Shamrocked..... 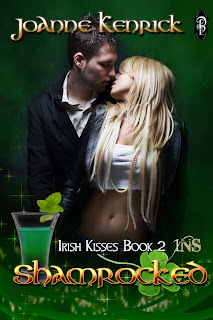 Devlin Kinney is the crass Irish charmer who helped Shaun Bell out on his 1Night Stand by packing him up a few surprises in his overnight bag in the HUGE bestseller SWEET IRISH KISS. Surprises both he and Rachel were grateful for. And now you can have all of him because he's back! With his toy box and a 1Night Stand of his own.

Bell's Irish Pub is open for business, and Devlin Kinney is serving up one tasty treat.

Devlin Kinney is focused on his Irish Rock band, Shamrocked. Between that and tending bar at Bell’s Irish Pub, he’s rushed off his feet. Still, he’s envious of Shaun who found his perfect woman through Madame Eve’s exclusive agency, 1Night Stand. Pushed for time, he follows his friend’s lead and hopes to be matched with a woman ballsy enough to share in his fetish for things that go buzzzz.

At the event of the year for soap stars, Elizabeth Grant meets Devlin and mistakes him for her soon-to-be The EastEnd co-star. Before she has a chance to confess she’s not his 1Night Stand as he seems to think, the silver-tongued smooth dancer proves irresistible. He seems perfect…for one night of pleasure. She’s ready to play the role of her life!

Will his Irish charm and toys be enough to hold onto his leading lady, or will his heart be shamrocked into next week?

Surrounded by bridesmaids—the hottest guy in the place. His thick Irish brogue carried over the chattering wedding crowd and bad party songs.

Swallowing any signs of stage fright, she checked her fake hair in a mirrored wall, plumped her boobs, and plastered on a smile before making a beeline for her drop-dead gorgeous, future co-star.

She waded through the rough sea of pink-chiffoned up women, snapped out her arm, and took his hand like one of those shaking weight things. Thought she’d blown it until his mouth tilted up into a tempting smile. Dimples. Oh, my. He would be popular with the ladies. Might even help get her noticed by movie producers. Dating this hottie would get her on every front page known to the British public.

“Liz.” She fought to keep focused on his face rather than his thick muscles and rhythmic movements. She couldn’t recall ever seeing a man who could make dancing to All Night Long by Lionel Ritchie so goddamned sexy. His jig was infectious—her arm swayed in beat with his, their hands still clasped together.

“Uh-huh.” The swarm of bridesmaids knitted their brows and pursed their lips. One even stamped her foot. Liz couldn’t help but turning on a sweet smile. “Buh-bye, ladies.”

JoAnne Kenrick, an ex-Ghost Tour Guide turned Romance Author, is a Welsh lass who has lived in various countries around the world. She now calls North Carolina her home, where she lives with her husband, two children and two cheeky cats. When they aren't demanding her attention, she can most likely be found watching a vampire movie, reading or baking up a British favorite in her N.C. kitchen. That is, when she isn't writing or chatting up a storm on social networking sites. Travel across the pond and faraway…with JoAnne Kenrick www.joannekenrick.com

JoAnne Kenrick is super appreciative of all the support her readers have given SWEET IRISH KISS. That same support managed to get Sweet Irish Kiss onto several different bestseller lists in several different online retailers, Amazon Kindle being one of them.

She would love to see Devlin's story garner even more success by getting him in the top 100 bestseller list on Amazon. So… If you buy Shamrocked from Amazon Kindle, SCROLL DOWN for the rafflecopter and fill it in with your receipt/reference number amazon emails you after you make your purchase FOR A CHANCE TO WIN A KINDLE FIRE OR A NOOK TABLET.

YOU SHOULD SEE A RAFFLECOPTER GIVEAWAY widget here. If not, then try waiting a minute. Sometimes it can take a while to load. If that doesn't work, it could be the browser you are using. You can enter using the alternative rafflecopter on my facebook page found here: www.facebook.com/joannekenrick. Quite often, rafflecopters don't show up on mobile devices, either.  IF you cannot see the rafflecopter in either instance, msg me your reference/receipt number amazon gives you after a kindle purchase VIA FACEBOOK  joanne.kenrick.50@facebook.com  I will manually enter this on your behalf.

-Kindle Fire and Nook contest is open to USA residents only. Sorry. International for the giftcards, though.
-The Nook/Kindle reader prizes mentioned will only be awarded IF Shamrocked reaches amazon's top 100 bestseller chart SO SPREAD THE WORD to your friends.
amazon GCs will be awarded regardless.
-By entering this contest, you are signing up to JoAnne Kenrick's Quarterly Newsletter.
-You have 48hrs to respond to the notification if you win, or a new winner will be drawn.
-No Purchase Necessary.
-This promotion is in no way sponsored, endorsed or administered by, or associated with, Facebook, Twitter, Amazon, or Blogger/Google. You are providing your information to JoAnne Kenrick and not to Facebook, Twitter, or Blogger/Google. JoAnne Kenrick is the only person who will have access to  the information  you provide, and it will not be forwarded or sold to any third parties (except the publisher if an ebook is the prize).
-We have the right to refuse any entry.
-If for any reason the Contest is not capable of running as planned we have the right to terminate the contest without picking winners.
-You must be over 18 (or 21 depending on your State/country law legal age for viewing/reading adult material) to enter.
at July 21, 2012